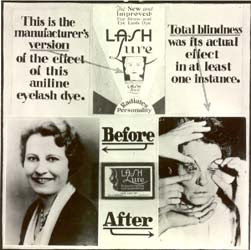 Mrs. Brown was to be honored by her local PTA that very evening.

At the beauty parlor hours before the big event, she decided to go ahead and try a cosmetic change -- to permanently darken her brows and eyelashes. Her hairdresser had a new coal tar-based dye called "Lash Lure."

Riding home, Mrs. Brown’s eyes started burning. According to Teresa Riordan, author of Inventing Beauty, Mrs. Brown made matters probably worse when she got home by applying various treatments herself, one boric acid, another a topical made by her pharmacist, and then “yellow oxide of mercury.’

At the PTA banquet that evening, Mrs. Brown was so uncomfortable she left early.

In the ensuing days, the skin around Mrs. Brown’s eyes ulcered and blistered.

Of the aftermath, The New Republic would write: “Her eyes are gone and the flesh around them is a mass of tortured scars.”1 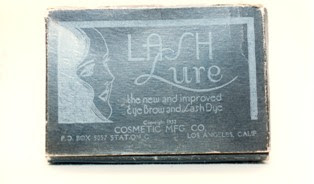 "Mrs. Brown" was a young socialite, so perhaps that explains why she became the poster child of the Lash Lure tragedy. But more than a dozen women were blinded, one 52-year-old woman developed a bacterial infection and died, and many others  had allergic reactions -- some accounts say thousands of women.

(If we are tempted to feel even a wee bit judgmental that anyone would be so foolhardy as to put a dye product so close to their eyes, consider today's popular procedure: injections into the face of botulinum toxin, or Botox.)

In the wake of Lash Lure, government got busy.

How could it not, with letters like this popping up?

Industry resisted attempts to impose regulations, but with consumers continuing to be victimized by toxic cosmetics, drugs and food products in an unregulated marketplace, Congress passed the Food, Drug, and Cosmetic Act of 1938. Among other things the Act “prohibits the marketing of adulterated or misbranded cosmetics in interstate commerce.”

The law didn’t (and still doesn’t) require the use of animals in testing cosmetics. But companies, newly subject to penalty for harm, decided in effect that thousands and thousands of animals would pay the price for their accountability and our peace of mind.

The measures they turned to, including the Draize and LD50 tests, are used much less today than they were prior to the 1980s. But rabbits and other animals still undergo painful and fatal procedures.

Some people refer to the Lash Lure case as proof that animal testing of cosmetics is necessary. But the toxic chemical (PPD) in Lash Lure had been banned in parts of Europe since the the turn of the century.

Indeed, when questioned by investigators, one of the company owners admitted she was aware of the dangers of PPD, but decided to use it because of its “staying power.” 3

In other words, the dangers of Lash Lure already were well-known -- though perhaps not by consumers like Mrs. Brown.