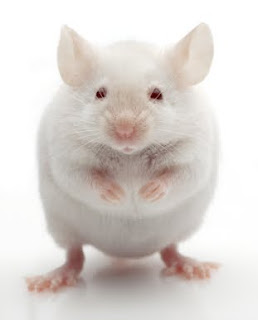 BotoxÂ® has been in the news lately, but no one’s talking about the poor mice.

But even as we read of a new study that shows mice grimace and make other facial expressions when in pain, there isn’t much being said about the severity of the test behind each batch of botulinum toxin type A -- a neurotoxin used to treat muscular conditions such as eye twitches and spasmodic torticollis, but which is better known for its wrinkle-erasing effects.

The test is called the “lethal dose 50 percent,” or LD50. It involves injecting mice -- historically, 100 mice per batch -- with different doses to find the dose that will poison the half of the mice to death. The injections cause paralysis and, if the dose is strong enough, suffocation, but can take 3-4 days to kill.

Late last year, British Union for the Abolition of Vivisection released findings of an undercover investigation into a laboratory that makes Dysport -- a Botox competitor. Its investigator saw mice suffering agonizing deaths and scientists taking the sickest mice out onto the hallway floor to kill them with ballpoint pens. Apparently the latter was an effort to be humane, but the BUAV said the scientists did not always succeed in killing the mice quickly; sometimes they just broke backs. BUAV estimates the lab kills 74,000 mice per year to test Dysport. Their video is below.

Although the UK has banned animal testing of cosmetics and personal products, labs can test biological medicines such as Dysport on animals.

In the U.S., the Humane Society has been after Botox manufacturer Allergen to replace the LD50 test. After years and years of pushing, HSUS finally saw some success. In early 2010 Allergan announced it had “reduced animal use in its testing protocol" by 78 percent. It also expressed "a firm commitment to developing a non-animal test to replace the animal-based test currently used to assess new batches of BotoxÂ® Cosmetic.” Of course that leaves questions.

Botox and now Dysport and other botulinum toxin type A brands are not going away. In 2009, there were 4.8 million procedures, making these injections the number one "minimally invasive" cosmetic procedure in the US, according to the American Society of Plastic Surgeons.

There also are reports that use of the shots for cosmetic purposes are increasing among youth, to change face shape and in at least one 18-year-old's case to "look fresh."

So it’s important to spread the word, because there are some people out there who are worried about their wrinkles but also are animal lovers and don't know how botulinum toxin type A is tested.